Shooting to Kill: How an Independent Producer Blasts Through the Barriers to Make Movies That Matter 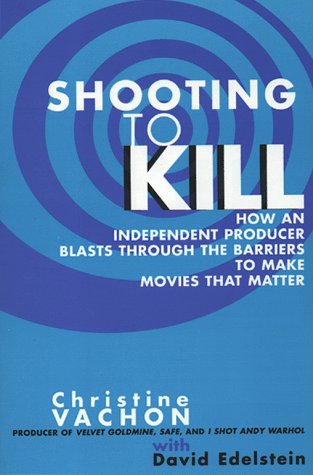 Complete with behind-the-scenes diary entries from the set of Vachon's best-known fillms, Shooting to Kill offers all the satisfaction of an intimate memoir from the frontlines of independent filmmakins, from one of its most successful agent provocateurs -- and survivors.

Hailed by the New York Times as the "godmother to the politically committed film" and by Interview as a true "auteur producer," Christine Vachon has made her name with such bold, controversial, and commercially successful films as "Poison," "Swoon," Kids," "Safe," "I Shot Andy Warhol," and "Velvet Goldmine."Over the last decade, she has become a driving force behind the most daring and strikingly original independent filmmakers-from Todd Haynes to Tom Kalin and Mary Harron-and helped put them on the map.

So what do producers do? "What don't they do?" she responds. In this savagely witty and straight-shooting guide, Vachon reveals trheguts of the filmmaking process--rom developing a script, nurturing a director's vision, getting financed, and drafting talent to holding hands, stoking egos, stretching every resource to the limit and pushing that limit. Along the way, she offers shrewd practical insights and troubleshooting tips on handling everything from hysterical actors and disgruntled teamsters to obtuse marketing executives.

Complete with behind-the-scenes diary entries from the sets of Vachon's best-known films, Shooting To Kill offers all the satisfactions of an intimate memoir from the frontlines of independent filmmaking, from one of its most successful agent provocateurs-and survivors.