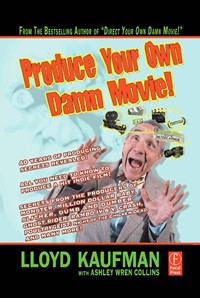 When it comes to producing, no one speaks with more authority than Lloyd Kaufman, founder of the longest-running independent film studio, Troma Entertainment.

He reveals the best ways to seek out investors, scout locations, hire crew and cast talent, navigate legalities, and stay within your budget. Featuring tips from some of the finest producers in the business (Mark Damon, James Gunn, Mark Harris, Tery Jones, Brad Kevoy, Stepehn Paul, and more!), this book gives filmmakers practical tools for getting a movie shoot started, keeping it afloat and seeing it through to the end.

Candid interviews, tips, tricks, and tidbits scattered throughout the book illustrate the many techniques you can employ to produce your own damn movie-Lloyd Kaufman shows you how it's really done.

This volume reveals the secrets of producing a low-budget independent film. Covering everything about production from the initial movie idea, all the way through pre-production and up to the first day of principal photography (including budgeting concerns to production-damaging acts of God), you'll get the inside track to producing your own damn movie.

Produce Your Own Damn Movie! will be your step-by-step guide on the journey to:

Hysterical in tone, filmmakers and producers won't be able to put this book down.